The Garmin S60 has been on the market for a number of years and long reigned as the heavyweight king of golf watches before the release of the S62.

The S60 is not without its faults and the same could be said for the S40 while the S42 looks to iron out some of the flaws of the S40, the main one being the poor battery life of only 1 round guaranteed in GPS mode.

The S42 is a mid range watch that is designed to sit in between the premium S62 and the entry level S12 and it is an excellent watch that looks amazing and has excellent battery life.

The S42 has also inadvertently come into competition with the S60 which is now available for a competitive price and still has more advanced features than the S42.

The S60 long reigned as the premium golf gps watch king and deservedly so. It’s color touchscreen, features and performance were unmatched in the market until the S62 came along.

The watch has 42,000 course that load fast on arrival at your course of choice and the 1.2″ color Touch screen is visible in all lighting conditions.

You get distances to the front, middle and back of the green along with distance to any hazards and lay up options for dog legs with a full hole overview. You can also pinpoint any point on the hole and get to distance to that point for masterful strategy.

You get green view with the S60 and manual pin position on the day so you can get the exact distance for pin hunting.

The Plays like feature also takes the slop into consideration when hitting downhill or uphill.

The watch hooks up to the free Garmin golf app and also to your phone via bluetooth to display messages and phone calls.

The battery lasts 10 hours in GPS mode and 10 days in watch which will guarantee at least 1 round every time.

This watch is still popular despite the release of the S62 which appears to be superior in many departments.

When the S40 was release in 2020, it was a little underwhelming. It looked great with multiple colors and quick change bands but lacked the features of the S60 and S62.

The watch got an upgrade in 2021 in the S42 which is also slightly underwhelming but did offer some key upgrades on the S40.

The battery life is the biggest one, the watch will now last 15 hours in Gps mode which is at least 2 rounds, compared to the 1 with the S40.

The internal mechanics of the watch have also got an upgrade and the watch looks a little bit more like the S62 while having all the same dimensions of the S40.

If you were hoping for a heart monitor in the S42, you will still be disappointed, it is still only available in the S62 watch.

There is no slop either in the S42 making it completely legal for tournament which will suit some players.

You get distances to front, middle and back of the green, doglegs and hazards with green view and manual position and it will hook up with the Garmin App, bluetooth with your phone and with the CT10 sensors.

For us the S62 is a better buy than the S60 and the S42 can be purchased on a budget, although it is almost the same watch as the cheaper S40 with a better battery life. The S12 could be a good choice for a better price than the S42. 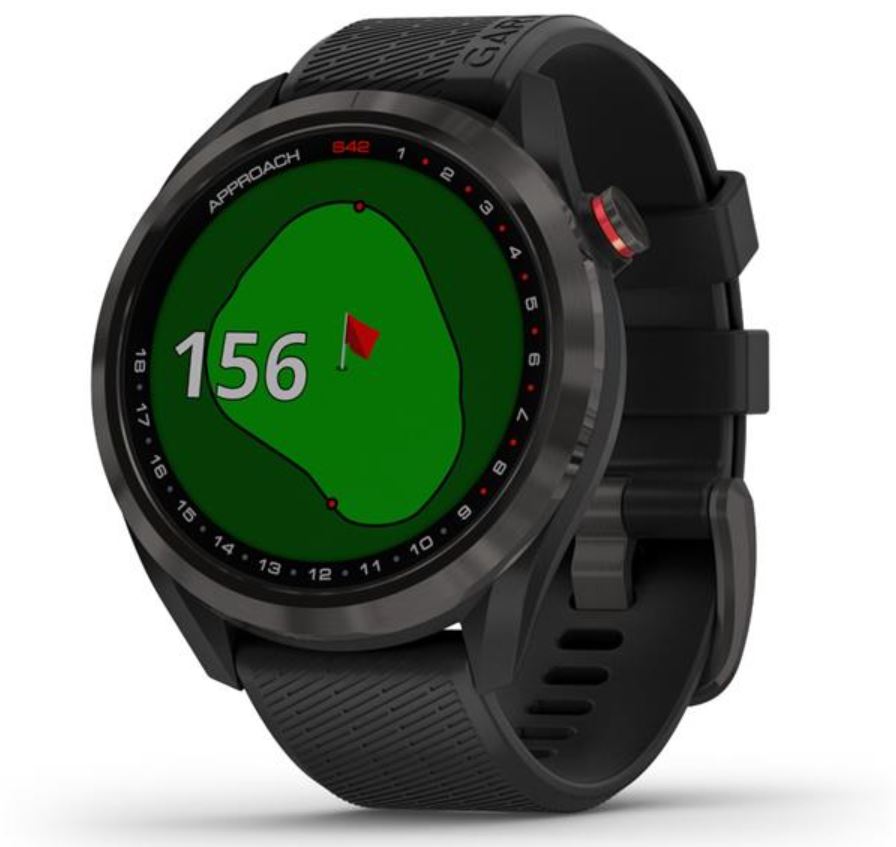 The S42 was released as a mid range replacement to the S40, designed to sit between the S12 and the S62. An excellent color touch screen watch. 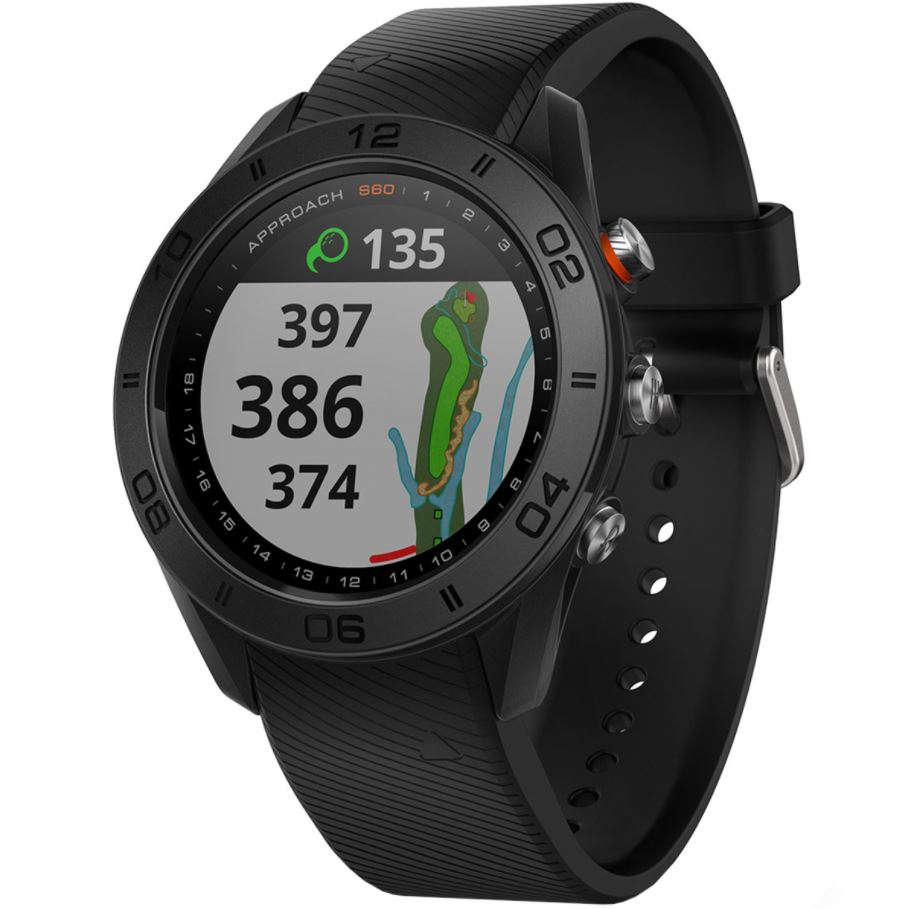 The Garmin S60 long reigned as the heavyweight king of premium Golf GPS watches, until the Garmin S62 came along with superior features and performance.

It is immediately apparent that the S42 is a beautifully designed color touchscreen golf gps watch that can be worn at all worn at all times, not just for golf.

The watch is less bulky than the S62 and as such will look better at a nice restaurant than the premium S60 or S62.

The watch comes in White, Grey and Black with downloadable interfaces and quick change bands which allows you to have a completely different looking watch to suit your clothing or any occasion.

This watch has 42,000 courses around the world and when you pull up to the course, it loads quickly. Usually minutes faster than their competition.

The watch will give distances to the front middle and the back of the green but also distance to any hazards with layup options included which can be excellent on dog legs and longer holes.

You get green view with the watch and manual pin position to get the exact distance you need for the  pin hunters among us.

There is no slope or plays like feature with the watch, making it completely legal for tournament play which is handy and a selling point for many golfers.

Tru swing is included to iron out any swing problems you may have. The watch connects to the Garmin App to track your shots and build up your stats. You can take this to the next level by attaching the CT10 sensors to the golf clubs to track your performance in detail with each club.

The watch also hooks up to your phone via bluetooth to display any message and calls you receive although it drains the battery a bit quicker.

Before the Garmin S62 came along, the Garmin S60 was the undisputed champion of Golf GPS watches but it looks to be overtaken by the enhanced performance and features of the S62.

The first thing to notice about the watch is the 1.2″ color touchscreen with the watches quick change bands available in black and white colors.

You get over 40,000 courses and when you arrive at the course the satellites load the course much faster than the competition in our opinion, often by a number of minutes.

The watch is clean, sharp, fast and accurate on the course with a sun resistant screen which is viewable in any lighting conditions.

Tru swing offers insight on your game and the watch hooks up to the free Garmin app to track your stats over time which can be taken to the next level by attaching the CT10 sensors to your clubs which are sold separately.

The battery lasts about 10 hours in GPS watch which should do at least 1 round and nearly 2 while the watch will last 10 days in watch mode.

While the watch doesn’t have a heart monitor, it does have a step counter and profiles for a wide array of sports from running to cycling and even skiing for a watch that can be worn at all times.

Maybe watches have tried to overtake the S60 in recent years and come up short with the S60 remaining as one of the top premium GPS watches available.

Who Are The Garmin S42 Watches For

The S42 is mid level watch, perfect for any body who wants the best looking watch with advanced features but without the heaviest of price tags.

The S42 is less bulky than the S60 or the S62 and it doesn’t have slope, making it legal for tournaments and easier to navigate. 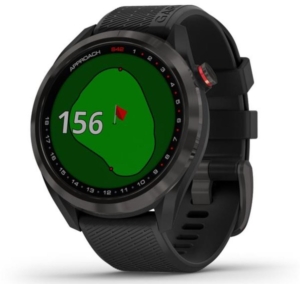 Who Is The S60 GPS Watch For

The Garmin S60 is for any who wants a premium golf gps watch that is fast and accurate with a sharp color touch screen.

The 1.2″ touchscreen leads to a sleek watch which can be used at all times and not just on the course, this would be one of the only reasons to favor the S60 over the superior S62.

This is not for a player that is looking for a watch that simply offers the basic distance information or anyone that would struggle with technology, like a senior player perhaps.

Pros And Cons Of The S60 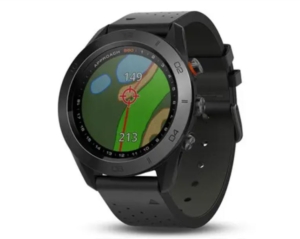