Titleist T200 Irons Review 2022 – Are They Forgiving, Are They Blades

The Titleist T200 irons put a new spin on player’s irons with an incredible depth of feel you wouldn’t expect from such a compact profile.

If you are looking for tor-level irons that perform as well as they sound and feel then the Titleist T200 will definitely be to your liking.

The Titleist T200 irons are some of the most technologically advanced that the company has ever put out.

First and foremost, the Titleist T200 irons were made for lower handicap players. The size of the blade alone should tell you that. At the point of address, you will notice a very thin topline and a blade that doesn’t reach out very far.

This will look great if you are a mid to low handicapper but intimidating if you have just recently started playing. These are very shallow muscle back irons that allow you to shape your shots to a precise degree.

The engineered muscle back plate also allows for an amazing amount of feedback and feel while dampening harsh vibration.

It gives them a very slick, streamlined look as well. The Titleist T200 irons also feature high-density tungsten weights that shift the CG progressively as you move down the set.

You can get decent distance from these irons too – if you have a fast swing speed.

However, they weren’t made with distance chiefly in mind. These irons shine on approaches. They are accurate and allow you to feel every nuance of your strike in real time.

To top it all off, the Titleist T200 irons come with a variety of custom shaft options including steel and graphite shafts from Mitsubishi, True Temper and Project X.

While not naturally long the Titleist T200 provides decent distance for players with faster swing speeds but more importantly; the accuracy to help you reach the pin in fewer strokes.

Are The Titleist T200 Irons Forgiving?

The Titleist T200 irons lack some of the features of other irons made for beginners and high handicappers.

Are the Titleist T200 irons forgiving? The answer is relative. If you are an advanced player you shouldn’t have any trouble working these clubs the way you want.

But you are going to be getting a lot of mis-hits if you are still hovering around the 20 handicap range.

A lot of clubs combine players and forgiving features nowadays but the T200’s aren’t like this, they are mostly suited to the better players only.

The Titleist T200 weren’t exactly meant to be forgiving specifically. They have a player’s head shape, minimal offset and a short blade so that they would be more workable – not more forgiving.

Are The Titleist T200 Irons Good For Beginners And High Handicappers? 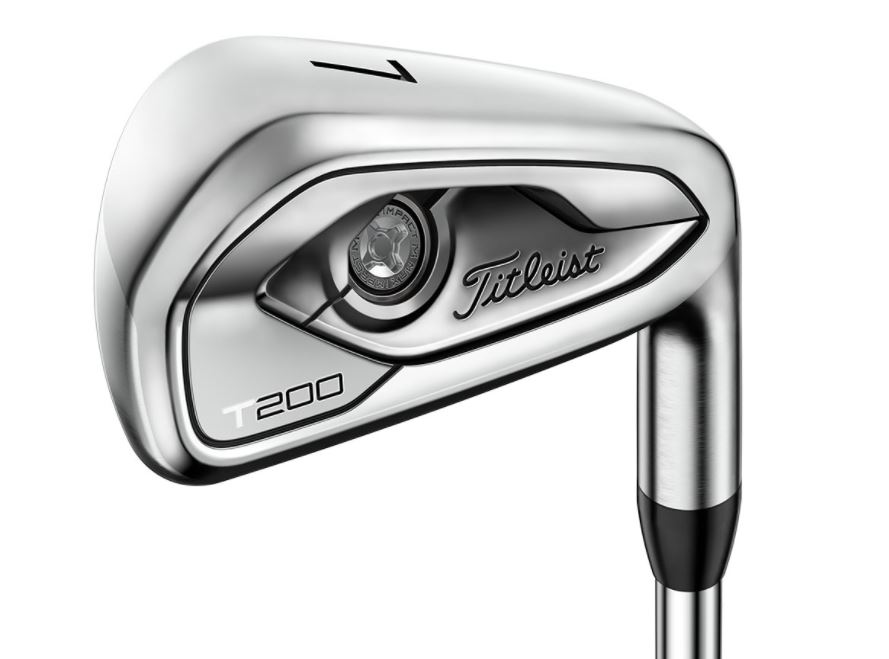 “The Titleist T200 will be better-suited to low handicap players with considerable iron experience under their belts.”

In short, no. You won’t want to drop the $186 per iron if you are a high handicapper. You will frustrate yourself with mis-hits and a lack of distance if your swing speed isn’t up to par.

Even though the Titleist T200 irons have a polymer core to help with ball speed, that’s really the only feature that will help a high handicap player.

Are The T200 Irons Blades

The t200 irons are considered as blades. They are players irons that allow you to shape shots easily and have higher spin rates than the more forgiving, game improvement sticks on the market.

The T200 and T300 irons are like night and day. The best set for you will depend on your level of play.

It’s hard to imagine that the T300 and T200 irons could be any more different.

The T300’s have a traditional cavity back design that will instantly offer more forgiveness for high handicap players.

The T300’s also sport a beefier sole and inexplicably, weaker lofts than the T200’s.

So which one should you buy? The T300’s are certainly more forgiving so if you need your irons to be user-friendly, go with the T300’s.

Ping G710 Irons Review 2022 – Are They Forgiving For High Handicapper...
Scroll to top