Getting the best performance form your irons means meticulous research and of course, a fitting. So if you are considering either the Srixon ZX7 irons or the Titleist T100 irons, play close attention to the following comparison overview.

We went out and tested both of these iron sets to help you narrow down your options. Both of these sets would be a solid choice for mid to low handicappers but we’re going to give you the details you need to know to make an informed decision. Let’s get started! 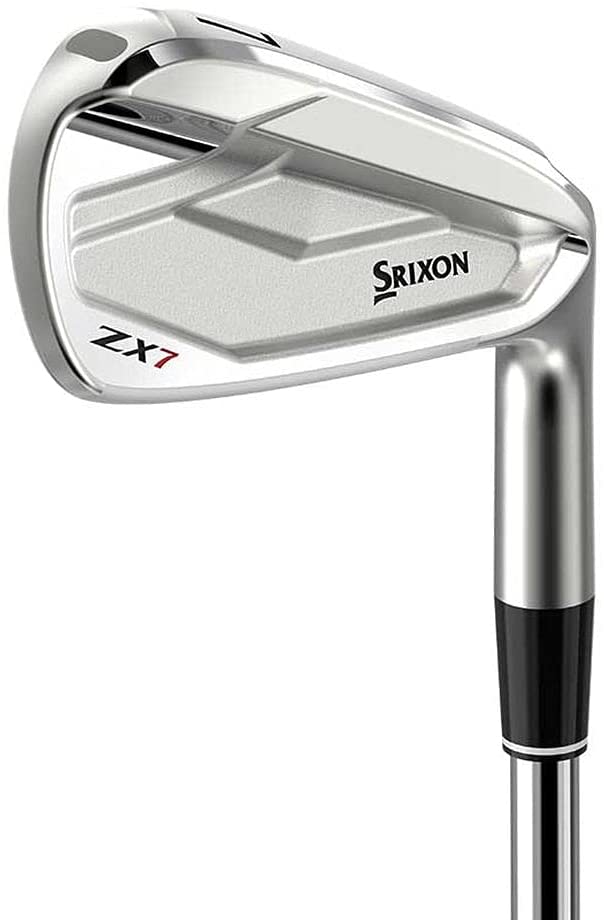 The Srixon ZX7 irons were forged from a single piece of carbon steel.

Right off the bat, this gives them a sweet feel and incredible consistency – exactly what you would expect from a player’s performance iron. What you wouldn’t expect though is the profile. The Srixon ZX7 irons sport a slight cavity which helps with forgiveness.

The longer irons are also have toe-biased weighting. Off the deck, this made for much straighter shots for our higher handicap testers. But or low handicap testers chimed in by commenting on the greenside performance.

The Srixon ZX7 spin like a dream and you get amazing control even on pitched greens. The lofts are also incredibly strong with the 9-iron clocking in at 41 degrees. 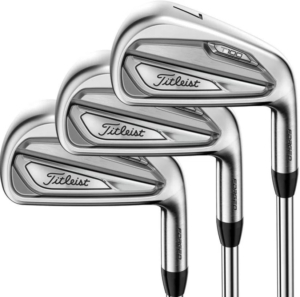 The Titleist irons would be a solid choice for any player looking for incredible stopping power.

The T100 irons have even stronger lofts than the Srixon ZX7 irons with the 9-iron in this set checking in at 42 degrees! For us, this meant amazing scoring ability even from long approaches. The T100 irons also have a unique continuous cradle construction which helps you sweep the ball off the turf or the rough with ease.

These irons launch very high and sometimes, too high. It was a bit difficult to keep them out of the wind at times. Also, the Srixon ZX7 irons played longer in general than the T100 irons. The CG is exactly where you want it in each of the T100 irons though. Tight shot dispersion and excellent greenside control are the hallmarks of these irons.

We really love the scoring power of both of these iron sets but what endeared the Srixon ZX7 irons to us was the feel and the superior distance. They offer more well-rounded performance than the T100 irons. 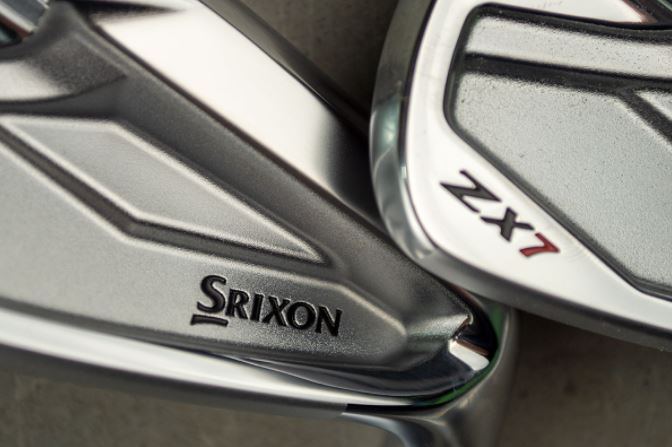 I think with Srixon changing their lineup so drastically, let’s chat about the technology they have put into the ZX7 irons before we get into our first impressions.

The Srixon ZX7 irons are what they call a Tour Cavity, they have repositioned the weight in the head to maximize the sweet spot, most of the weight has been moved towards the perimeter, this increases forgiveness and makes the sweet spot bigger. It also gives the ZX7 a soft feel at impact with increased workability.

Srixon have changed the groove pattern in the ZX7 irons, the grooves in the 8 irons through to the PW are sharper, narrower, and deeper, this will give you much more spin and stopping power on approach shots into the green, allowing you to attack the flags more than ever.

V-Shaped soles are an absolute game changer in the ZX7 irons, the specifically designed sole helps the club glide smoothly through the turf, even when you strike the ball poorly. This is one of the key technologies making the irons more forgiving.

To make this iron the ultimate player’s iron, Srixon have added a Tungsten in the toe of ZX7 irons in the long and mid irons (3 iron to 7 iron), the Tungsten will increases MOI giving you more stability, while the forged 1020 Carbon Steel body decreases vibrations for an incredibly soft feel.

From previous years we were a bit skeptical about testing these irons, as soon as we opened the box that all changed. The ZX7 irons look freshed, the sharp lines and small head shape looked incredible.

Srixon have done an unbelievable job here. The irons were incredibly soft off the face, and the ball flight was amazing, almost looking like they penetrated through the air.

Forgiveness wise, we were very surprised. Miss struck shots still flew well, and the clubs slid through the turf with ease.

We were most impressed with the workability and consistency of these irons, exactly what a low handicap player would be looking for. Rarely did we get a ‘flyer’ and the way we were able to hit shot shapes with ease was phenomenal.

All in all we will give Srixon an A+ with regards to the ZX7 irons. 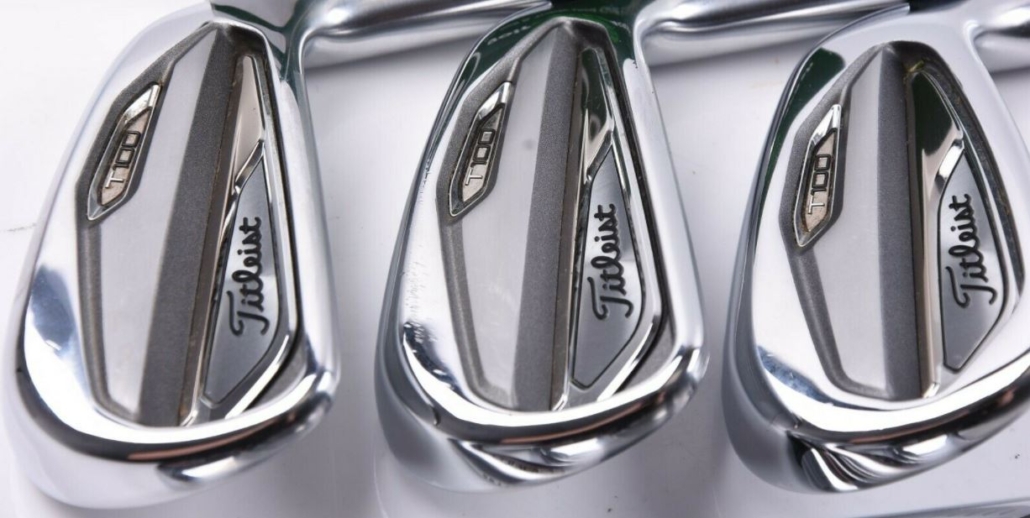 The first thing to notice about the T100 is how solid and sturdy they look as forged irons.

These irons build on the success of the AP2 irons and set out to deliver precision, consistency and control for single digit players who are looking to a set of irons to lower there score further.

The irons are a cavity back design that perform like blades and can be considered game improvement irons for players approaching or at professional level.

The clubs have added more camber for excellent turf interaction and there a tungsten weights added to the heel and toe of the clubs for an optimized COG and a high MOI.

These clubs deliver the performance that the best players in the world need.

Who Are the Srixon ZX7 Irons For?

The Srixon ZX7 irons are aimed at your low handicap golfers. These irons have incredible control and workability, however with that you lose some forgiveness, meaning mid to high handicap players should stay away from these irons.

A low handicap player looking for a clean simple look, with a small head shape and narrow top line, should consider giving the ZX7 a try.

Like we mentioned before, with Brooks Koepka joining their ranks, it means they mean business, and these irons sure do live up to the hype.

The Srixon ZX range has an additional 3 models to their range, this gives the range massive scope to cater for all handicap levels, as well as the ability to build combo sets. We were really impressed by the wide range of the ZX family, not many manufacturers out there have such a versatile iron option that caters for all handicap levels, and look so good. Generally the game improvement models look thick and chunky, but the ZX range is far from that.

The ZX5 iron features the same DNA as the ZX7 irons however there are a few differences that give them a bit more forgiveness and distance. The ZX5 irons have a slightly longer blade, wider sole, and more offset, this will give the iron a bigger profile, which will appeal to the mid handicap player. Additionally low handicap players could use the 6 to 4 iron in their longer irons to help with forgiveness.

The ZX4 still offers a clean look at address, but is more of a game improvement iron, they are aimed at your high handicap player, the ZX4 iron has the the widest sole, longest blade, and most offset in ZX family, giving to the most forgiveness, perfect for the high handicap player or beginner.

ZX Utility isn’t really an iron set, but more of a driving iron. It is thinner and smaller than the previous generations. It falls perfectly into the ZX7 and ZX5 range for a replacement in the longer irons. 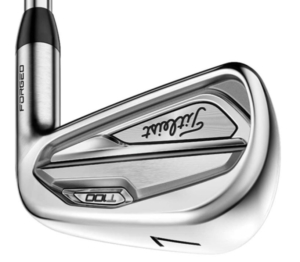 The T100 irons are built for the better players among us, they have tremendous feel allowing to low handicappers to stop the ball dead on the green while also providing ball speed and accuracy.

The Titleist T100 are also available as T100s which have stronger lofts and a thinner face for more distance.

The T200 are thicker clubs allowing more forgiveness and distance for mid handicappers and the T300 are bigger again to suit the high handicappers for adequately.