Ping G710 Irons Review 2022 – Are They Forgiving For High handicappers

One of Ping’s most attractive iron sets just happens to also be one of their most forgiving and technologically advanced.

The Ping G710 irons may not be the company’s longest irons but they produce amazingly high shots and feel fantastic. 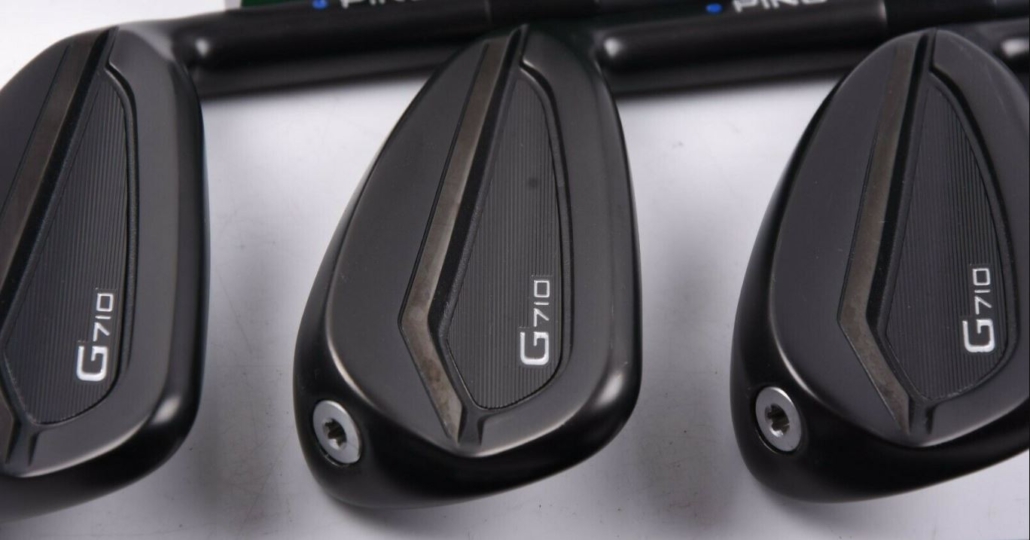 The Ping G710 irons will satisfy the inclinations of players who value good looks, amazing feel and satisfying sound.

If your first impression of the Ping G710 irons is anything like ours, you will fall in love with how these irons look long before you pick them up and take a swing. The Ping G710 irons sport a sleek, sexy black hydropearl finish.

It’s almost like a matte finish that not only makes the irons look unique; it adds a texture and feel to all of your shots. The Hydropearl finish is also meant to repel water for better performance in wet conditions.

There is a high density tungsten screw in the toe and another tungsten weight in the heel which gives these irons 5% higher moment of inertia than their predecessors, the Ping G700’s. So if you are looking for a user-friendly set of irons, these would be a great choice.

The set comes complete with Arccos Caddie smart grips which will appeal to all you tech-lovers out there.

The forgiveness will make the Ping G710 irons a good call for high handicappers. The performance will endear them to mid to low handicappers.

Are The Ping G710 Irons Forgiving?

The Ping G710 are a step up from the Ping G700 irons in term of forgiveness. They were designed with the goal of creating exceptionally forgiving irons in mind.

In short, yes. The high MOI created by the extreme perimeter tungsten weighting in the heel and toe means that these irons swing ridiculously balanced and even. It also creates a large sweet spot to work with.

Are The Ping G710 Irons Good For Beginners And High Handicappers?

The Ping Ping G710 have something to offer beginners, intermediate players and even low handicappers.

One of the things that amazed us about this set of irons is that we could immediately tell that it provided something of value for virtually every kind of player.

The high MOI will obviously make them congenial for high handicappers and beginners.

However, the maraging steel faces provide so much control, accuracy, feedback and performance that more skilled players will be able to bite the green better with these irons.

That coupled with the generous lofts (starting with 20 degrees in the 4 iron) up the scoring capability of these irons.

If you are after a set of game-improvement irons specifically then the Ping G710 irons may be more to your liking.

The Ping G710 irons definitely provide more value across the board. Whether you are a low or high handicapper, you will be able to use them effectively.

However, the G700 irons would be a great fit for anyone who wants the benefits of the G710’s but with a player’s profile.

The G700’s are smaller and have a thinner topline. But they still sport the aerospace grade maraging steel face which allows them to flex to a high degree.

The G700’s also feature a hollow-body design which draws weight away from the face.

Titleist T200 Irons Review 2022 – Are They Forgiving, Are They Blades