How To Know When To Switch From Game Improvement Irons

If you are a mid-handicapper and have been playing with game improvement irons for a few years, you have probably contemplated testing out players distance irons or blades.

Even though you are thinking about it, you are unsure whether to take this leap of faith.

After reading this review, you will have the answer of how to know when to switch from game improvement irons to less forgiving creations. We will look at the alternative options, and I will try to plea with you not to change.

Intro To Game Improvement Irons In Your Experience

Being the alternative character that I am, I actually went from blades to game improvement irons.

When I started playing golf, the local store only sold players irons and, that is how I used to play, with great difficulty.

However, when I switched to game improvement irons after a decade on the course. I appreciated the forgiveness, higher launch, and consistency of these irons over blades.

What Are The Benefits Of The Game Improvement Irons 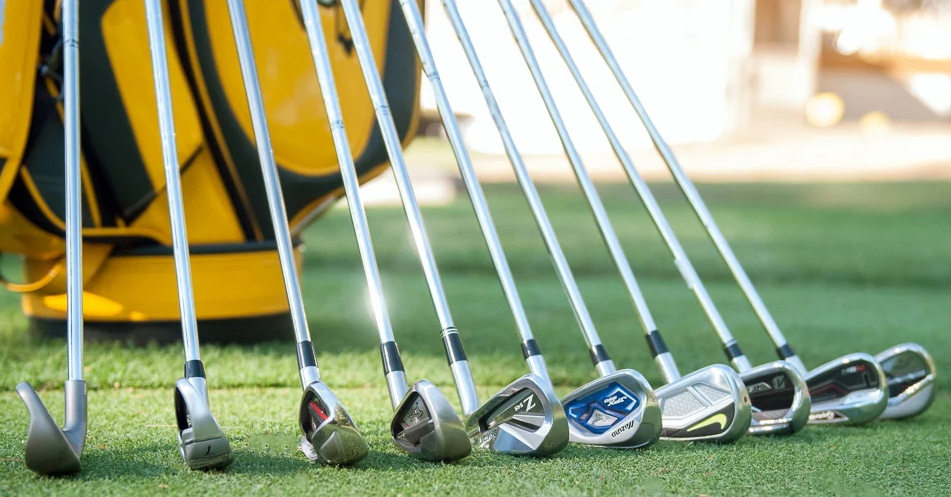 Johnson and Stachura further mention that game improvement irons are designed to promote a high and powerful launch. This leads to increased carry and more consistent distance, even on off-center strikes.

The final benefit of game improvement irons is the forgiveness that provides you with. When you hit a shot in the wrong zone on the face, you still achieve a satisfactory result. If that happens with a players iron in hand, you can expect far more drastic consequences.

Can Game Improvement Irons Hurt Your Game – In What Ways

The benefits of game improvement irons far outweigh the negatives.

However, the high launch promoted by these clubs can cause players with faster swing tempos to balloon their shots. Resulting in a loss of distance.

It means that your ball flight will be straighter and, it will be harder to work your ball close to the hole on tight greens.

The higher launch and straighter flight mean your total distance is likely to be less.

Compared to a players distance iron.

What Are The Signs You Should Switch From Game Improvement Irons

One of the main reasons players look to switch from game improvement irons is because they desire more shape in their shots.

If you are at a point where you want more control over your shots and the ability to hit a draw or fade when necessary, you should change.

If you find that your swing speed has increased and you are gaining too much height on your shot.

It may result in a loss of distance, which means you should look at irons that promote a neutral or lower ball flight.

What Kind Of Irons Should They Switch To? 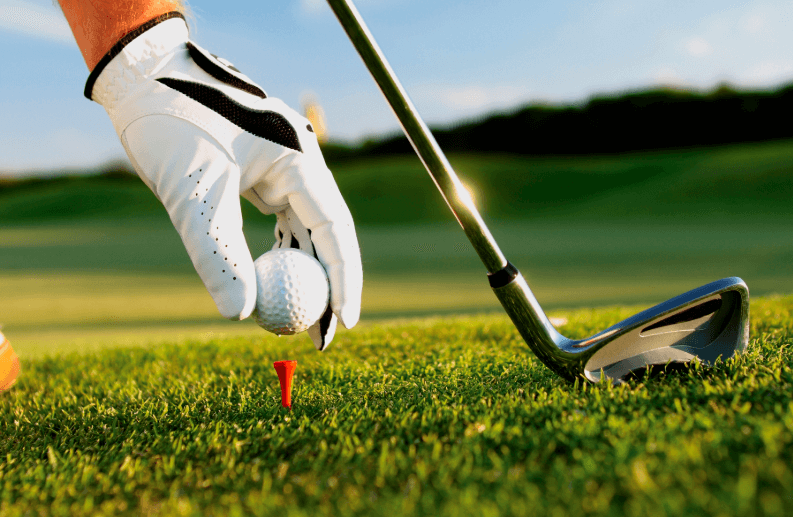 The natural progression from game improvement clubs is players distance irons. While these irons are still focused on delivering optimal distance.

They produce a lower launch and reduce spin. Players distance irons offer limited forgiveness. And, while yardage is exceptional, the lack of spin makes it hard to stop the ball on the green with long and mid-irons in hand.

However, these irons do give you the ability to shape your shots more than their game-improvement cousins.

If game improvement irons carried you to the status of a low handicapper. You may wish to bypass players distance irons and switch to blades.

Bear in mind that blades offer little to no forgiveness and, if you do not strike the ball in the sweet spot, you will lose distance and could end up with a slice or a hook.

I recommend only lower handicaps or professionals play with blades. Otherwise, golf will be harder than it already is, and it will take all the fun out of it.

Should Any Players Switch To Super Game Improvement Irons 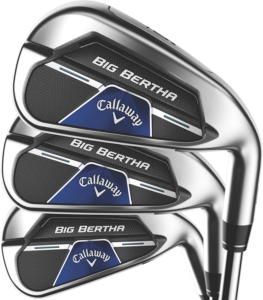 If you feel that game improvement irons do not offer sufficient ball speed, distance, and forgiveness.

You should consider a set of super game improvement irons. Our best pick in this category is the Callaway Big Bertha B21 irons.

The B21’s are the first irons in the Big Bertha range to feature an AI-designed flash cup face employed to deliver phenomenal speed and spin throughout the set. If you struggle to consistently launch your shots these irons offer optimal height to provide maximum carry and distance.

While the high level of offset promotes straighter ball flight to keep you in play, it reduces your ability to shape any shots. However, the reduced side spin generated by the B21’s lowers the risk of a slice or hook when you strike the ball in the wrong place.

Added to the game improvement features is the soft feel of the irons brought about by the inclusion of urethane microspheres. The microspheres absorb unwanted vibrations to leave a smooth feel even on off-center strikes. 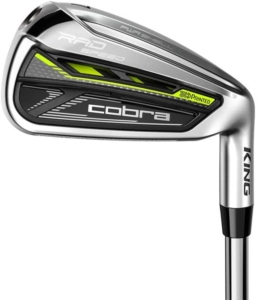 The Cobra Radspeed irons are worth testing if you are thinking of making the leap from game improvement to players distance irons.

While you may lose some forgiveness compared to your game improvement clubs, these players distance irons will help increase your total yardage.

These irons contain various weightings for the perfect combination of CG stability, low spin, and ball speed. Ultimately the radial, extreme heel and toe, and tuned rad weighting are designed to optimize your launch.

Cobra further inserted a forged face to increase its flexibility for rapid ball speed and a high launch, which results in additional carry and longer distance. Capping off the irons is the 3D printed Cobra medallion which helps to save weight and delivers a superior feel. 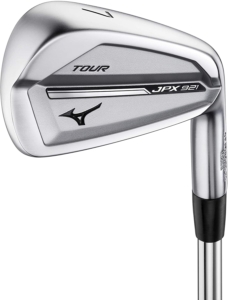 If you are confident in your ball striking abilities and want to work a draw or a fade, players irons or blades are the way to go.

However, I suggest that only low handicappers and professionals play with these irons.

Our best set of irons in this category are the Mizuno JPX921’s and, it seems uncontracted Pros on the PGA Tour agree. The stability frame contains toe bias weighting that promotes straighter consistent ball flight, which is unique for players irons.

Furthermore, Mizuno included a thicker cavity pad that helps you feel the shot for longer. Exactly what superior players crave from their irons. Plus, the irons are coated in a Pearl brush finish, which reduces glare and helps to repel moisture away from the face.

Finally, the shorter irons in the set contain a narrow sole that works to provide exceptional turf interaction for clean contact in any lie. This helps to generate optimal spin for exceptional control on and around the green.

Game improvement irons are a fantastic creation that has helped make golf enjoyable and slightly easier for the average player.

The ball speed, forgiveness, and high, powerful launch bring an element of consistency to our games.

The answer to how to know when to switch to game improvement irons depends on you as an individual. Are you ready to give up the forgiveness of game improvement irons? For the longer-hitting players’ distance irons? Or are you a master ball-striker who values the ease of shot shaping with players irons?

If you need more shape and yards, switch to a players distance iron like the Cobra Radspeed’s. However, if you desire exceptional feel, acoustics, and workability, a players iron such as the Mizuno JPX921 is worth testing.