Cobra vs Cobra in this battle of the game improvement clubs with the Cobra Xl Speed set from 2020 and the Cobra Fly Xl set of 2021.

The Cobra Xl Speed set was very well received in the golfing world, with it’s customization options, it became very popular and they are great set for those with aspirations to get better at the sport.

The Fly XL set came along in 2021 and are a game improvement set focused on offering more distance for those with higher swing speeds while maintaining maximum forgiveness in the process. 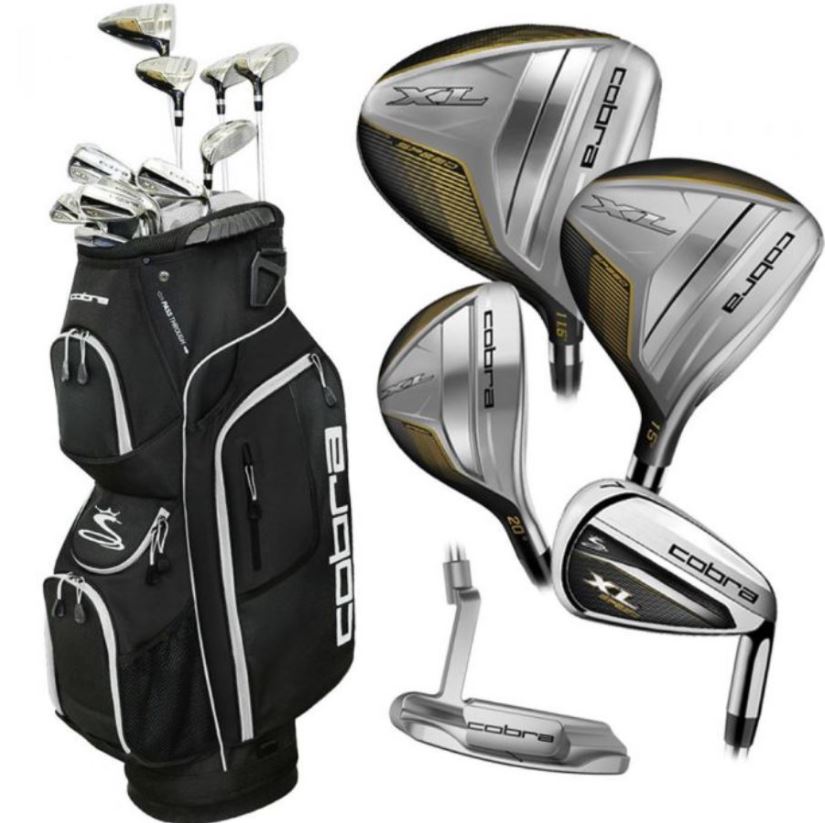 The Cobra XL Speed set is super forgiving and are very popular for those with slower swing speeds.

The clubs are game improvement with a low COG in the driver, woods and hybrids. The clubs are light and have massive sweet spots for consistently accurate shots.

The clubs come with a cart bag which also has a large drinks pocket for those hotter summer days.

You can a full array of clubs without any distance gaps and the clubs are very welled reviewed in the online community.

The Cobra Fly XL are better suited with those with faster swing speeds and are also an excellent game improvement.

Cobra have ditched the dull black and gone with the Blue and white for the Fly XL.

What Cobra noticed was that beginners with higher swing speeds tended to slice the ball and they have gone with a heel based tungsten weighting system that promotes straighter shots and maximum distance.

The clubs also come with regular or stiff shafts for the average to faster swing speeds.

Both of these sets are the same price with the Fly Xl just stealing the contest in terms of quality and performance. 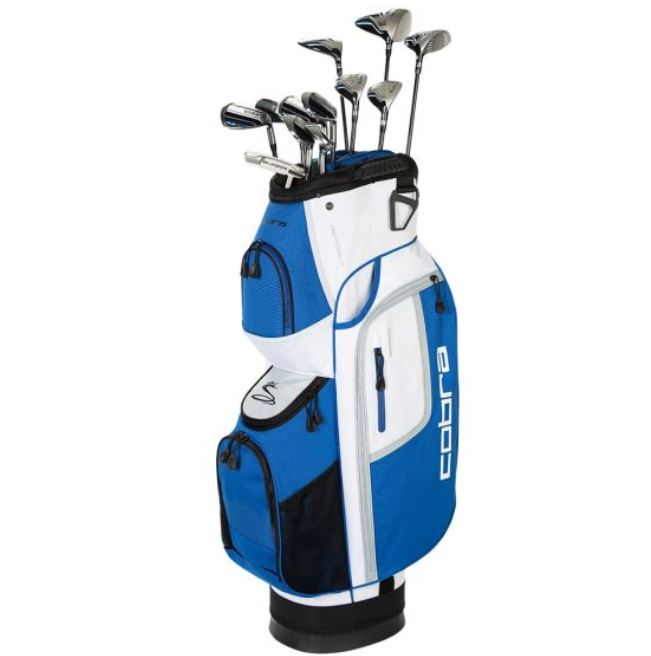 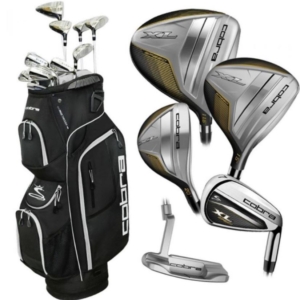 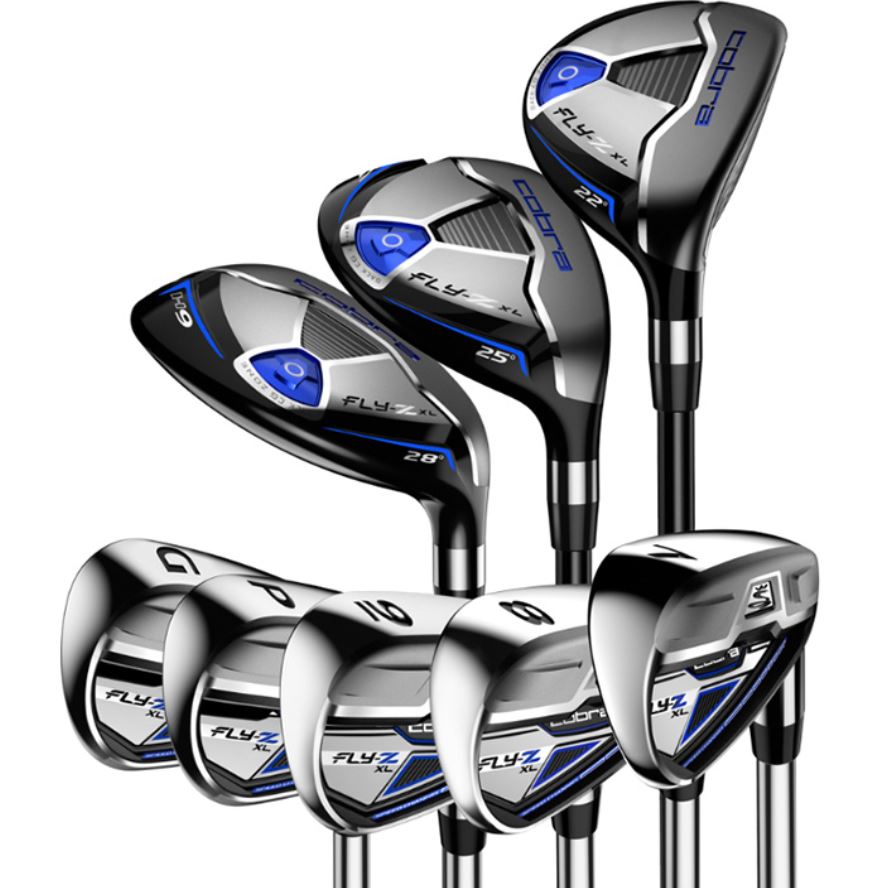 Cobra XL – Whats In The Bag 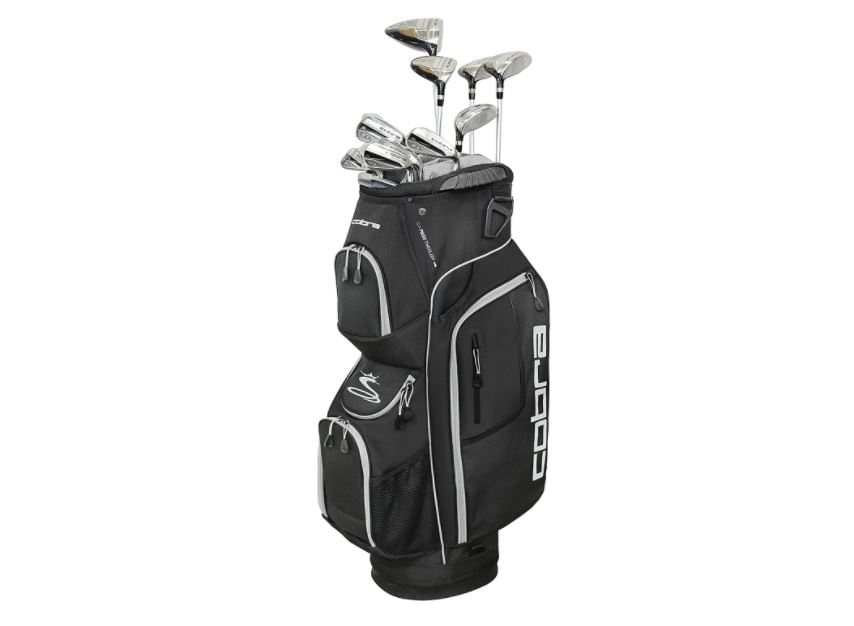 The Cobra Xl Set comes with The Following clubs and tons of customization options. 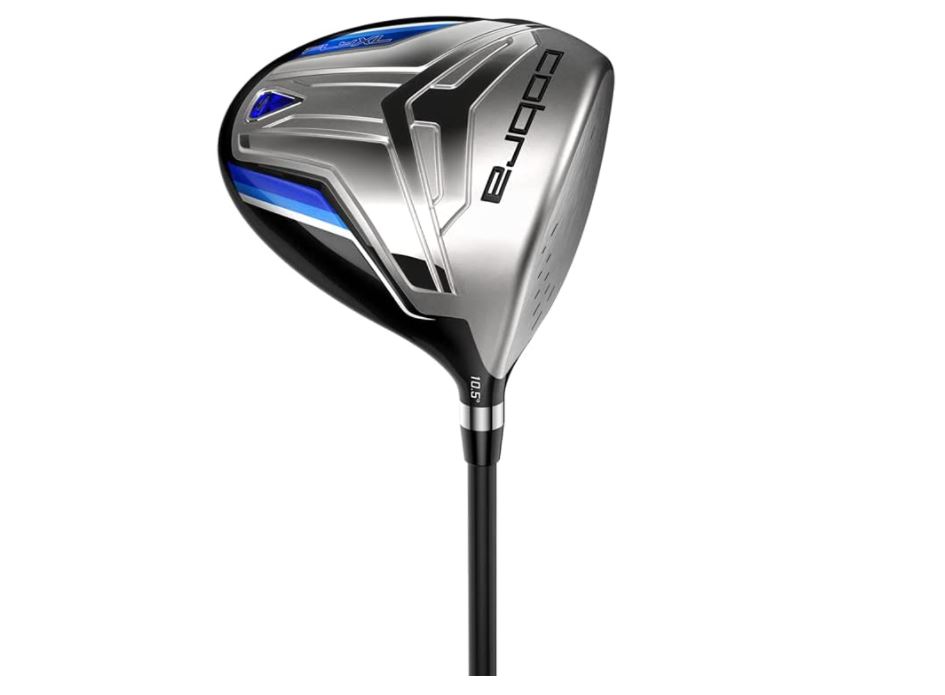 Right out of the box, the Cobra Fly XL have a sleek look that will make you want to hit the links immediately.

In true Cobra style, the company has combined great looks with accuracy in the Cobra Fly XL set.

The 460CC driver has a titanium face to maximize flex and ball speed.

It also features heel-biased weighting to help correct that slice.

The set includes a 3 and 5 fairway wood.

They are also heel weighted so they produce amazingly straight shots off the deck.

The 4 and 5 hybrid play nice and long so you can actually hit some greens with them on lower par holes.

The irons will do a lot for you if you are struggling with accuracy on the fairway.

They are cavity-back which, inherently makes them more forgiving because of the raised MOI.

On top of that, they are perimeter weighted to make the sweet spot feel endless.

The Cobra Fly XL set comes with a sand and pitching wedge which, is nice for when you find yourself staring down a tough in-between shot.

The head profile of the wedges are nice and beefy but you still get good spin control out of them.

The machined face of the blade-style putter feels amazing.

It provides you with the roll control that you are probably seeking now that you are really concentrating on your short game.

You can get your  iron shafts in alloy steel or graphite for the slower swing speeds.

You also get a chose of regular or senior flex giving the clubs excellent customization options. 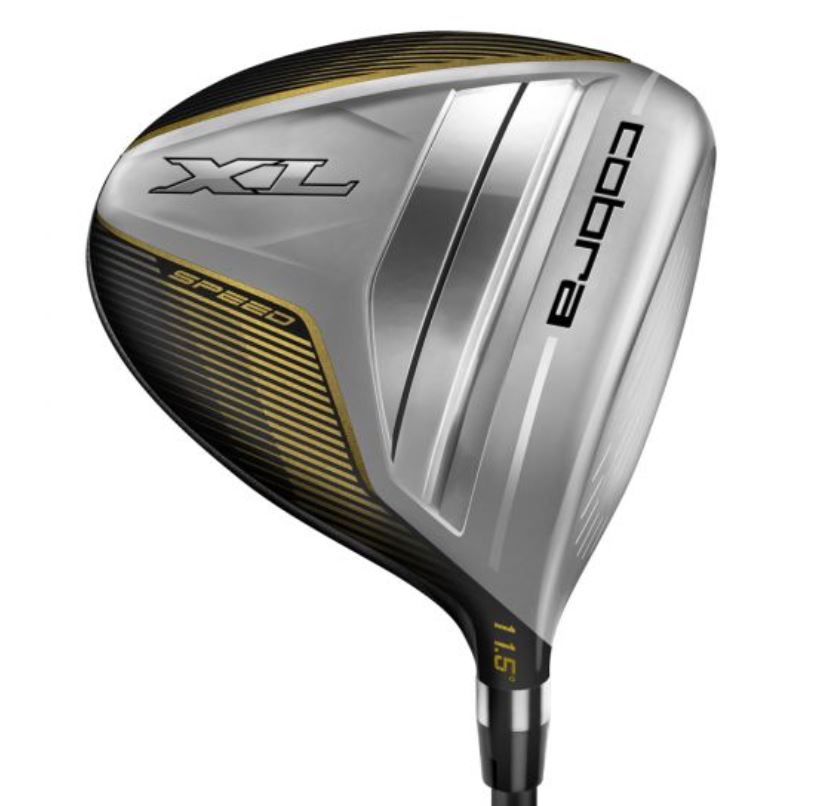 First impressions of the Cobra Xl were the numerous 5 star reviews online and that the clubs can be perfectly customized for senior players and fast swinging high-mid handicappers.

You can quickly tell that the quality of the Cobra XL set is better than your regular beginners set and that the clubs are built for maximum distance and forgiveness.

The driver is 460cc Titanium which is rear weight for a lower and deep COG of gravity which leads to long and far strikes. If you go with the graphite irons, you get an 11.5 degree driver which is perfect for anyone with a slower swing speed.

The driver is 10.5 in the steel version.

The 3 wood is going to be a nice club off the tee and off the fairway and the 5 wood can send it greenwards on plenty of par 5’s. The lofts are generous and the turf interaction is good. High and straight flights with massive sweet spots.

Hybrids are the go to club from the fairway and even the rough. You can the ball flying high with the back weighting and high MOI of the Cobra XL hybrids.

The irons have game improvement written all over them with thick chunk soles but you should be able to generate some spin with the clubs as well.

Control and forgiveness becomes more paramount with the shorter clubs and you should be able to get some good workability out of the wedges.

Nothing to write home about with the putter. It is a good quality blade putter with a visual alignment.

Choice between steel and graphite in your irons. This will affect the degree of the driver too so graphite shafts are reserved for seniors, juniors and even ladies.

You also get to chose between regular and senior flex so this can really suit a fast swinger looking to move up from being a high handicapper to senior that can player looking for a set of friendly clubs.

Who Is The Cobra Fly XL Set For?

The Cobra Fly XL will be perfect for intermediate players who aren’t so much focused on distance anymore. They were built to improve accuracy from the tee to the green.

While they lack some of the even more advanced features that make Cobra golf clubs so desirable; they have just enough to help the mid handicapper get to the next level of their game.

You can get the Cobra Fly XL driver in 10.5 or 11.5 degrees of loft. You can also choose between graphite and alloy steel shafts with regular or senior flex, making the clubs set perfect for all swing speeds.

The stock shafts are Cobra Fly-XL shafts and the stock grips are Lamkin REL 360’s. 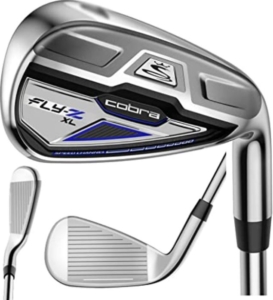 Who Is The Cobra Xl Set For 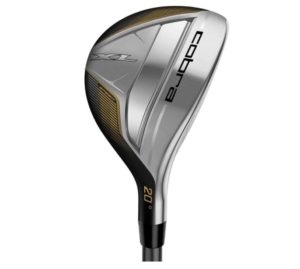 This is somewhere between a premium beginner set and a set for someone looking to become a mid handicapper.

It can also be customized to any swing speed so if you know how to play the game already and want a real proper set of clubs with no distance gaps, the cobra XL is certainly worth a shot.