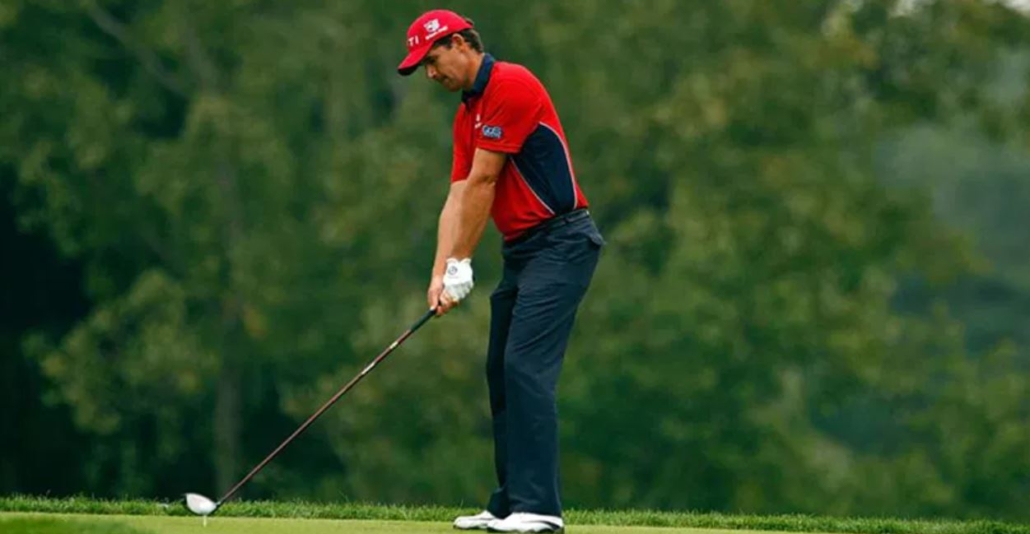 The challenge with golf is that numerous factors impact our swing and performance that it can be difficult to identify where you are going wrong.

It could be the loft on your clubs or the weight and flex of your shaft. Alternatively, it may be your grip, stance, aim or swing.

In this post, I will identify the benefits of a open golf stance. And see how it compares to a closed approach.

While it may not solve all your problems on the course, it will help promote the correct swing path to achieve a straighter ball flight.

Why Having The Right Stance Is Important? 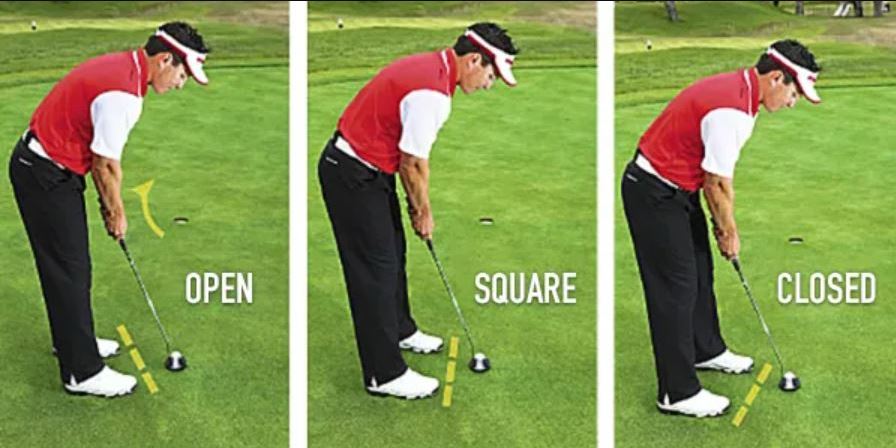 There are three types of golf stance’s, open, square and closed.

When addressing the ball, your stance determines the direction of your aim and prompts varying swing paths.

As a result, it directly impacts the direction of your shot.

The wrong stance for your game will reduce your accuracy and contribute to hooks and slices.

How Is Your Stance Going To Affect Your Performance?

David Leadbetter explains that your stance has a direct impact on your swing path.

If you operate with a closed stance you are susceptible to slices. This stems from the fact that a closed stance has right-handers aiming to the right of the target. And lefties to the left of it.

Conversely, if you use an open stance you will be aiming left of the target as a right-hander. And to the right of it if you are a left-hander. That setup can prompt an out to in swing, causing you to fade your shots.

Overview Of Open Vs Closed are Golf Stance

The open vs closed golf stance are two of three stances golfers use when approaching the ball.

What Is The Open Stance? 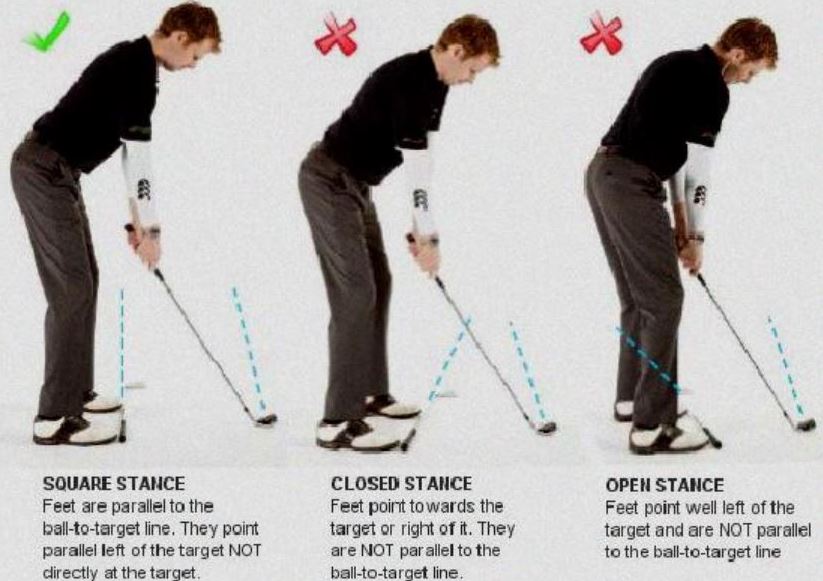 In this article on the Benefits Of A Closed Golf Stance, we explained that an open stance occurs when you set up aiming to the left of the target, as a right-hander, and to the right of it for lefties.

This stance helps you to hit a fade. As it promotes an out to in swing path, opening the clubface at impact.

If you would like a visual display of how to set up with an open stance you can view this video from The Art of Simple Golf.

What Are The Benefits Of The Open Stance?

An open stance gives you more freedom to rotate your hips and accelerate through impact, which helps to increase your back leg drive for maximum power at impact.

Optimizes hip rotation through impact helps you enhance your power, which helps to deliver a high launch.

The open stance is comfortable as golfers are positioned a decent length from the ball, giving them the freedom to open up and swing.

Excellent Setup For A Fade

An open stance sets you up to hit a high controlled fade if you can get your clubface slightly opened at impact and in unison with your hip rotation.

That way, your ball will start off to the left and fade gently back towards its target.

When your ball is on a downhill lie slopping to the right, as a right-hander. The ball will start out in that direction.

In this scenario, it is advisable to open your stance and aim left of your target to compensate for the slope.

What Are The Disadvantages Of An Open Stance?

If you swing over the top and can’t get your clubface into the correct position at impact.

You can hit a severe slice with this stance.

As someone who plays with an open stance, I despise straight shots, and here is why.

I have become accustomed to hitting a fade, which is why I use this setup.

However, there are times when I swing square and hit the ball directly left of the target.

Considering that you are aiming to the left of your target as a right-hander, you are opening yourself up to the potential of hooking your shot further left if your swing tempo is off.

If your clubface is closed at impact, you may find yourself in serious trouble.

What Is The Closed Golf Stance? 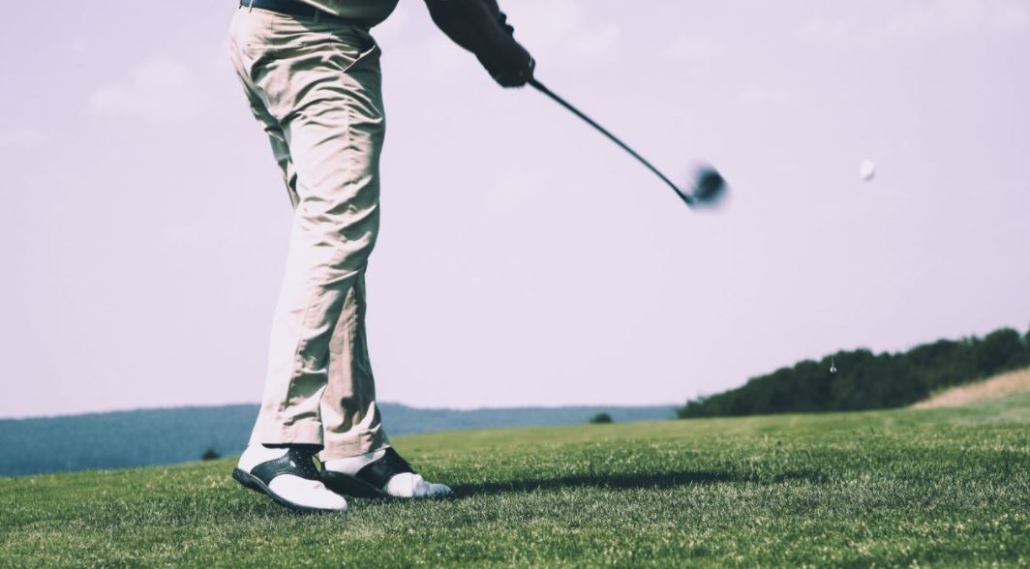 Contrary to an open stance, where right-handers aim to the left of their target.

A closed stance will see you aim to the right of your target. Left-handers will aim left of their desired target.

I use a closed stance if I want to induce a draw or factor in the gale-force right to left winds that I often face at my home course.

It also helps to bring my hands around my body to hit a drawing punch or stinger.

What Are The Benefits Of A Closed Stance?

Promotes A Side On Downswing

Instead of coming over the top and slicing a ball as players do with a neutral or open stance, a closed stance promotes a side on strike and then allows you to bring your hands through after impact. As Mark Crossfield explains in this video.

Whereas, the freedom of movement from an open stance can cause you to bring your hands over the top on your backswing cause the clubface to open at impact and slice.

Suited To A Draw

Aiming to the right of your target as a right-handed player sets you up to draw the ball.

A closed stance will see you swing through the ball, helping you to shape your shot. If your clubface is slightly closed at impact, it will help you prompt a draw.

When you are looking to keep the ball low, you want to decelerate on your downswing and finish with your hands around your body.

The freedom that your arms have helps you to finish with a shorter follow-through. In turn, this allows your hands to finish around your body, delivering a lower launch and more control in high winds.

When your ball is on a downhill lie sloping to the left, you want to set up with a closed stance to account for the angle.

A closed stance will help you start the ball right of your target, allowing for the slope to bring your ball back towards your desired target.

A shortened follow through helps to promote a cleaner strike at impact, as you focus more on your downswing and impact instead of your upswing.

In this video, Golf Pro Gareth Jones provides a clear demonstration of how to pull it off.

What Are The Disadvantages Of An Open Stance?

Since a closed stance requires you to aim right of your target, you must draw the ball back.

However, if you swing over the top on your backswing, it can cause your clubface to open at impact, promoting a slice and causing your ball to fly further right of the target.

If your swing rhythm is off and you manage to close your face at impact, it can cause a snap hook, which will likely lead to trouble and a few drop shots.

Low ball flight has its perks in windy conditions and on a links course requiring additional roll.

But, it can also be a curse, especially on well-manicured courses where you need to land the ball softly and stop it fast.

In these conditions, the ball can run through the green and cost you GIR’s and a birdie putt.

What Is The Square Golf Stance?

As the name suggests, a square golf stance occurs when a player addresses the ball with their feet aiming parallel to their target. When you set up in this manner, your clubhead should be facing your target while your feet are parallel.

If your feet are aiming at your target, your ball and clubhead will be pointing to the right of it. If you are a right-hander, which means your ball will start right of the target.

I recommend beginners start with this setup as it will feel most natural.

What Are The Benefits Of A Square Golf Stance?

Considering that you set up, aiming parallel to your intended target. It is the simplest stance to help you aim correctly.

Aiming parallel to your target helps promote a straight back, straight through swing for straighter ball flight, and more consistency.

A square stance helps you position your weight evenly between your two legs which deliver superior weight transition between your front and back leg at impact for a fluid swing.

As the square stance is the most natural feeling setup when addressing your ball, it is also comfortable. It is for this reason that most beginners and high handicappers feel more comfortable using this stance.

Although a square setup does not guarantee that your clubface will strike the ball square at impact, it is the stance that makes this the easiest to achieve.

What Are The Disadvantages Of A Square Golf Stance?

Although the square stance is designed to help you hit the ball straighter, it can prompt a slice.

If you swing over the top on your backswing, it will cause your clubface to open at impact and start your ball right of the target.

Your ability to shape a shot depends on where your clubface connects with the ball and your subsequent follow-through position.

While it is not impossible to do with a square stance, it is difficult to pull off.

If you need to hit a fade, stick to the open stance, and for a draw, a closed stance.

What Golfers Should Use The Open Stance?

Golfers who are looking to combat a snap hook.

Or induce a fade, should consider setting up with an open stance. Furthermore, this approach is ideal for players looking to generate maximum power at impact.

Is A Open Stance Good For Seniors?

Senior golfers who are feeling fit and strong can use an open stance to ensure they generate optimal power at impact.

However, overall I would suggest using a square or closed stance to reduce your follow through and damage to muscles and bones on the upswing.

What Should Women And Juniors Use?

The real answer to this question depends on what you are most comfortable with and your skill level.

However, I would suggest starting with the square stance and working from there.

What Stance Do The Pros Use?

Tour Pros do not use one specific stance. It varies depending on the shot they are trying to play.

If they are looking to strike a fade, they will use an open stance. Conversely, if they want to hit a draw, they will set up with a closed stance.

If they want to hit the ball dead straight, then they will employ a square stance approach.

Do Different Types Of Shots Need A Different Stance?

Ultimately the position of your clubface at impact determines the shape of your shot.

However, your swing path, stance, and grip play a role in how your clubface strikes the ball.

So, to make it easier to play different shots, you should setup with the relevant stance, as described above.

Conclusion On The Benefits Of A Open Golf Stance

Our review of the benefits of an open golf stance has shown that different setups can assist us in achieving varying results in terms of shot shape, accuracy, spin and distance.

We can see that an open golf stance helps to induce optimal power at impact for a high, powerful launch. It also aids us in playing a controlled fade. However, this setup can lead to slicing or hitting the ball left if you don’t induce the fade.

Conversely, a closed stance is ideal for playing a draw and hitting punch shots. If you get your swing wrong with this setup, it can lead to a nasty slice or a duck hook.

My recommendation to all beginner golfers and high handicappers is to start with the traditional square stance and build from there to find what works best for your game.